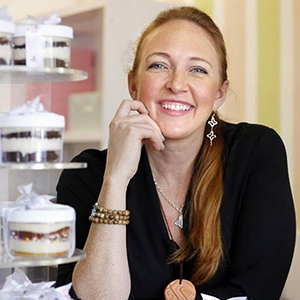 Misha Kuryla graduated in 2004 with a master’s degree in International Business from Florida International University. In 2005, Misha’s Cupcakes was born and sold over $50,000 worth of cupcakes in its first year.

Two years later, Kuryla moved operations from her home into a warehouse in 2007 that turned into her first commercial bakery. During that summer, she opened a retail cart in Dadeland Mall, which instantly became a daily go-to spot for fans. By the end of 2017, there were a total of eight additional Misha's Cupcakes locations in Miami and Broward, and a pop-up at the Miami International Airport.

Today, Misha's Cupcakes makes more than 10,000 cupcakes a day, in over 36 flavors. Kuryla stays true to her community in Miami, where the company provided over 80,000 cupcakes in donations for the year 2017. She is involved in FIU's alumni groups, mentoring programs, and is a regular speaker at College of Business classes and events.